I love having a snow blower and having a shovel as my weapon of choice no matter how much snow. ﻿

I had a few beers in me at the grocery store last night. My sister drove. And I bought Greek yogurt to make a cheese concoction to stuff some habaneros today. And it says “Traditional” on the front in bold red lettering which in my tipsy mind-sense was like, “Sweet, here’s the plain Greek yogurt I need! I rock.” and this morning I opened it up to mix with some other awesome ingredients and it was PINK. I looked a little closer at the container and it had raspberry in little writing off to the side without a single picture of any raspberries. So, I went out to shovel some snow and eventually get the correct yogurt. I’m not a yogurt buff, but that was a little misleading even if I was high on confidence after drinking two Dark Horse Rain In Blood’s. ﻿ 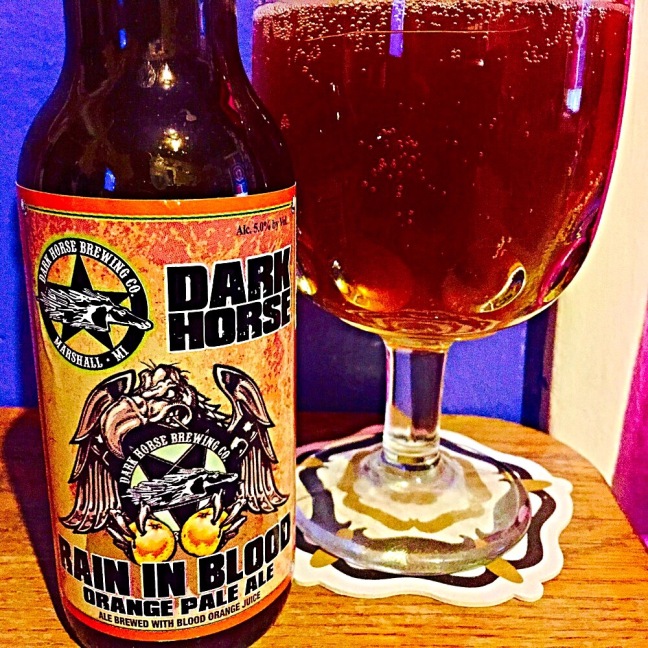 Rain In Blood is an okay beer. It is drinkable as long as Slayer is available to listen to. \m/. I like me some Slayer and they were actually my first concert where I was in the middle until slayer came on and it seemed like a million 6’5″ biker dudes bum rushed the stage, squashing me into the third/fourth row back like a bug. I don’t know how to describe general admission “rows” at a metal show. I was 17, a little drunk, a little high and geeked up on some amphetamines. I could not breathe and lasted for a while, but had to crowd surf out with the help of one of those 6’5″ biker dudes. I was pretty close to the actual band when I came out of the crowd and I totally flipped them off! Sorry to get into that, but it is the yogurts horrible labelings’ fault.
The beer was not very orange flavored and kind of a letdown with the regularly awesome beers from dark horse. I think the six pack was a wapping $12, also. Way overpriced, but immediately had that sense of Slayer come over me when I first saw the beer on the shelf. It was a good feeling. I did make homemade Bleu Cheese Dressing before the yogurt destroyed my whole life. ﻿

I quit measuring ingredients a long time ago. I also came to the conclusion 98% of recipes are just guidelines and are there for a reference. I do have a strong background of cooking on many different levels. My concept isn’t for everyone. Some people definitely need to follow recipes if the food is expected to be edible. I decided not to guess or try to even bullshit measurements to share. I apologize for the lack of recipe completion and for my yogurt in the last sentence. Use your imagination and have some fun! ﻿ 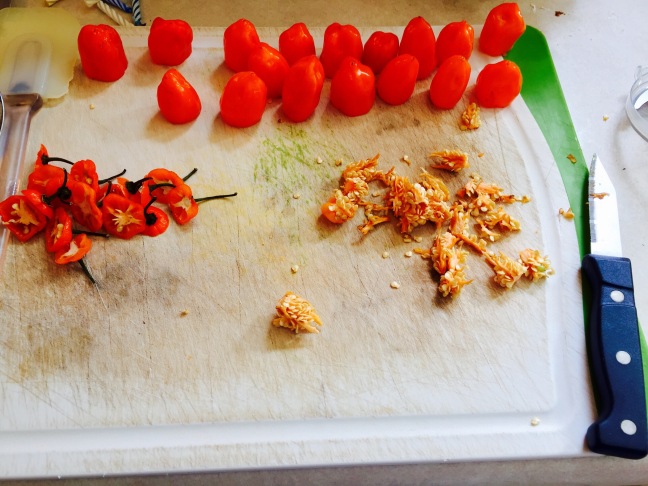 Caution:
When handling habaneros or hot peppers hotter than jalapeños, please use extreme caution if touching your face, using the restroom and/or showing a girlfriend/wife/pet/other any touchy feely affection. Your face is always itchy and your bladder is always out of control when handling habaneros. And I have a hilarious, yet painful, story involving my college girlfriend after I was making some awesome chili with various hot peppers that I do not want to get into at the moment. Again, use your imagination. I recommend washing your hands like ten times before the hotness and burning qualities of your hands do fade.
Ingredients for Bleu Cheese:
-Veganaise
-Gorgonzola
-Soy Sauce
-Sriracha
-Sour Cream
-Butter
-Milk
-Apple Cider Vinegar
-Sea Salt/Pepper
-Fresh Dill
>Mix ﻿ 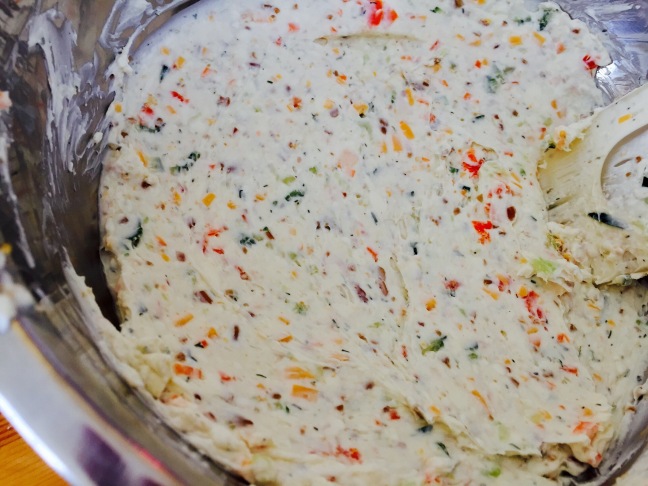 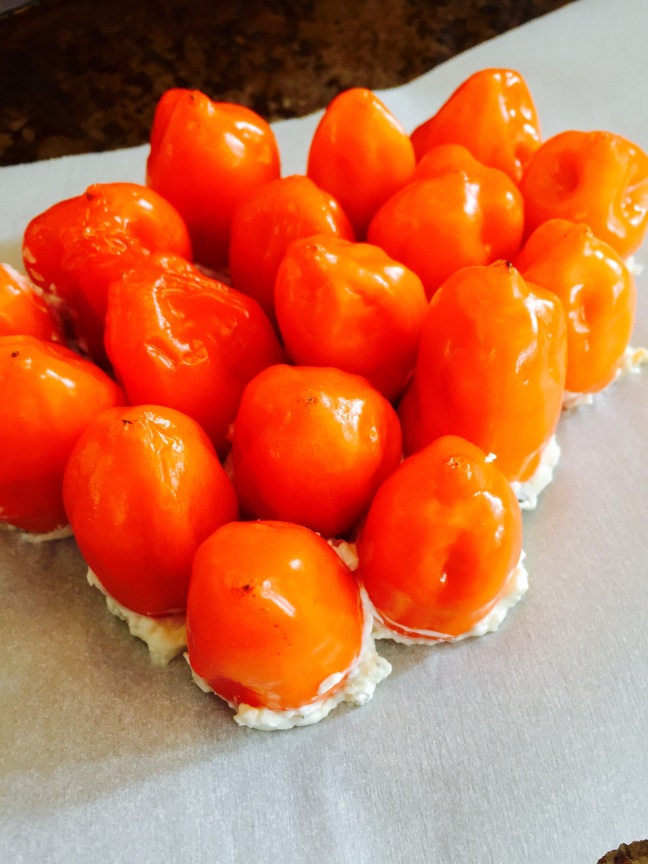 Stuffed Habaneros:
I used the remaining habaneros from a bunch I bought last weekend. I made 17, I believe. I sliced the top off manually ripped the stem off and diced and saved, deseeded and deveined them as much as possible with a pairing knife. It is very tedious and please do not forget to constantly wash your hands! I chose not to level at the bottom. I instead stuffed them all somewhat carefully, somewhat dangerously and turned them upside down onto parchment paper on a pizza pan in a tight circular shape. ﻿

I then tore out approximately 18 inches of aluminum foil and folded into a strip to wrap around the angry mob of upside down stuffed habaneros, tying the ends together to secure this wild bunch and to tighten them up to make them angrier.
I then put some parchment paper on yet another pizza pan and put it upside down on top the mob and flipped all of the gloriousness. See what I did there. I’m brilliant. I took the stuck parchment paper that was smothering this crazy dangerous mob and discarded. Preheated the oven to 225* F and mentally prepared myself for it to get even hotter in here. I baked them for 25 minutes and then immediately broiled them on low, rotating once halfly (if that even makes sense), for 4-6 minutes, and then turned the broil to high for one minute to add some color.
Serve however you’d like. These babies are hot as hell. And I would dare/challenge Adam Richmond to eat 15 in his glory days. Good luck to any braves out there.
NOTES:
-I do not want the cheese mixture to get too hot and make a huge mess.
-I first wanted to level the bottom as you would for stuffed green peppers, but habaneros are so small. I chose not to and created this make-shift aluminum foil contraption to keep the stuffed habaneros standing.
-I don’t really like mayo and I honestly think Veganaise is much better.
-I’m a huge believer in organics and NonGMO Project Verified, but I am not rich and it isn’t always affordable for me, unfortunately.
-I’ve seen recipes for Bleu Cheese that call for Worcestershire, but most are not even vegetarian as they have anchovy.
-And it saddens me to learn last year that Guinness is not 100% vegetarian.
Also, Slayer has a 1986 album, Reign In Blood, with track number 10 being the song Raining Blood. I doubt I got to listen to it when it first came out as I was only a one year-old and my parents were legitimate, graduated high school in ’69, hippies. That is why that beer made me super excited.
Winter cycling is awesome and I love doing it, it’s just not as easy to do every day when it’s below freezing. You could follow me on Strava to see if I do ride today.
Athlete number 2678291
http://strava.com/athletes/2678291
I do not do drugs and neither should you! “Good people drink good beer.” Hunter S. Thompson